INNER EAR: LISTENING TO THE SPIRIT 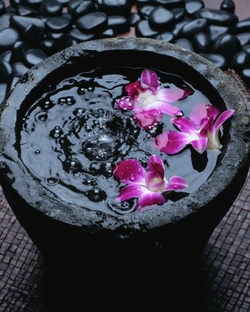 Only a decade ago, talk of Yoruba spirituality was seldom heard and barely understood. There were only 3 or 4 four good books on the market and just as few websites to explore the subject. By June 2005, Ifá promised “Baba nlo ree r’ata bo gbogbo ile aye” (that Orunmila would “spread his protective umbrella over the whole world”). Today, Yoruba spiritual practices are far from mainstream, but they have had an undeniable effect on mainstream consciousness. In some places, the term “ase”, for example, has replaced “amen” as the preferred way to punctuate wishes and prayers. I have even been to churches where people familiar with African cultural expressions (e.g., capoeira, salsa and kwanzaa) affirm their deepest desires by saying ase!

As Orunmila continues to “spread his protective umbrella over the whole world”, more people from diverse philosophical, cultural and social backgrounds are seeking the wisdom of Yoruba tradition. Almost immediately, the student’s thinking is challenged as she or he is forced to think the way the ancients thought in order to see and understand the organizing principles of Yoruba spirituality. During our newly formed study group, we came to some very important realizations about what happens when the Western thinker encounters Yoruba tradition. Among the many illuminating ideas that emerged, I would like to address communication.

One participant noted the fact that here in the US, we place high value on the ability to articulate YOUR idea. At home, in school and at work, we are conditioned to express ourselves directly and succinctly. We live under the unspoken pressure to “Get to the point.” And while overt communication is effective when we need to give specific directions, it is not so effective when we need to invite someone into the fullness of our experience. We realized how direct communication diminishes the listener’s freedom to contemplate the implications of what is being said, then decide what to think and how to feel about it. Yoruba thinking, to the contrary, places a high value on subtlety. One proverb says that “for a person of good character you only need to recite the first half of a proverb…” This is true because the second half of the proverb, as well as the wisdom it communicates will unfold internally.