Patience is the Greatest Virtue 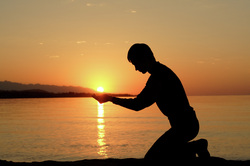 While Èsù’s character is synonymous with impetuous motion and perpetual change, other òrìsàs epitomize unwavering stillness and abiding calm. One such deity is Obàtalà (Lisa, Òrìsànlá, Oxala). As the Yorùbá Arch Divinity, Obàtalà is the venerable father, whose wisdom fills the devotee with aristocratic poise and regal presence. From his oriki we get a glance of Obàtalà’s austerity:

He is patient.
He is silent.
Without anger he pronounces his judgment.

Here it’s important to note that we all enjoy some degree of Obàtalà consciousness. For example, recall a time when you had to demonstrate deep cool. Maybe you were confronted by an emotionally intense situation, like natural childbirth or attending a loved one’s funeral. Perhaps you were facing a fast-approaching deadline or you were about to present some very important information. Think about what it was like to be “at the eye of the storm”, where, in spite of the fact that everything around you was spinning, you found yourself in a state of deep stillness. This is a flash of Obàtalà consciousness.  After many years of practice and experience, a wise person comes to understand the virtue of stillness. Yoruba traditional thought reminds us that “What an elder sees sitting down a youngster cannot see standing up.”

Like his elder brother Obàtalà, Orúnmìlà is also notoriously serene.  In a verse of the Holy Odù Ifá called Ogbe Ogunda Orúnmìlà teaches us that when he is offended he waits three years before responding, giving the offender ample time to rectify the situation. Even when he does decide to respond his motion is as slow as the snail, even though he has as many feet as the millipede, who has 200 pairs of feet but still moves slowly and gracefully. Orúnmìlà says that if a stone obstructs his path, he coils up beside the stone until falling leaves and branches fall, forming a bridge for him to cross. Likewise, if a tree falls in his path, Orúnmìlà says he will wait for it to decompose before continuing the journey.

An uncontrolled temper does not create anything for anyone.
Patience is the father of existence.
A patient person has everything.
She will reach a ripe old age.
He will enjoy a healthy life.
And she will enjoy life thoroughly,
Like a person tasting honey.

Once there was a poor man who had only a single set of ragged clothes, lived in a ragged house and struggled daily to feed himself and his wife. The depth of their deficiency, however, was the absence of children.  One day, God answered their prayers and sent the unfortunate couple patience, child and money. On the journey to the poor man’s house, patience, child and money reached the river bank. Patience started across, slowly but surely. Meanwhile, the water was too cold for money and too deep for child.

Money refused to carry child on the grounds that wealth is senior to progeny. While they stood there quarreling, patience quietly returned and carried them across, one by one. Eventually, the three travelers arrived at the poor man’s home. They explained that Olódùmarè had sent them as an answer to their prayers. After five days with the poor man he and his wife must pick one and send the other two back to heaven.

The poor man consulted his wife. “If we have a child without money how can we feed it?” she asked. “And patience after all, is worthless. Pick money.” Next he consulted his friend, Abinuku. Unbeknownst to the poor man, Abiniku was secretly jealous of his friend. He wished that the three travelers had visited his house instead. So he deliberately gave the poor man what he considered bad advice. He said, “Your wife is right. If you pick a child without money you cannot feed it. But at the same time, money minus a child means your estate will goes to strangers upon your death. So chose patience.” The poor man agreed with friend’s advice. At the end of five days, his wife was disappointed to find money and child packing their belongings and bidding the poor couple farewell, while patience was settling in to live with the family.

The two travelers again arrived at the river bank. Again the water was too cold for money and too deep for child.  Once again, money refused to carry child on the grounds that wealth is senior to progeny. Once again they stood there quarreling. But without patience there to ferry them across, they saw no other option but to return to the house of the poor man to seek refuge. Later that evening, you can imagine his wife’s elation to see money and child approaching the house again. She and her husband were happy to take them into their family to settle in alongside patience. This is why the Yoruba say that one who has patience has everything.

Make time this week to create a plan for deepening your well of patience and forbearance. Good things will soon follow.