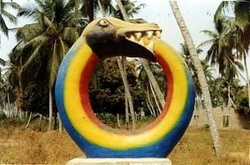 Atunwa is reincarnation, according to Yorùbá theology.  It is one of the single, most important principles of our belief system and world view. In fact, it is absolutely safe to say that, “if you do not understand atunwa, nothing else you do in the Yorùbá religion will make any sense at all.”  Contrary to popular belief, òrìsà worship is not about the accumulation of power and wealth. It is not about amassing libraries of knowledge, colorful beads and countless pots.  Yorùbá religion has absolutely everything to do with establishing a balance between heaven and earth.

Ajo laiye, the journey of life, takes place in a time-space continuum that reaches back to the time before time, from which Olódùmarè  assigned every lineage and individual its particular Earthly mission[i]. My second teacher, Yagbe Onilu, was notorious for citing the proverb that reminds us “may you complete the errand given to you by your ancestors.” Here, it’s important to note that, whereas the Hindu believe a person will be reborn as a higher or lower life form as a consequence of higher or lower behavior, Yorùbá thought teaches us that people are reincarnated within our own lineages. So the consequence of poor behavior is being reborn into poverty later on. Likewise, the consequence of exemplary behavior is being reborn into favorable circumstances in future generations. Yorùbá traditional thought encourages rebirth as means through which an entire lineage can satisfy its heavenly ogbligations. Holy Odù Ifá Irosun Iwori  says:

Let us do things with joy.
Those who want to go, let them go.
Those who want to stay, let them stay.
Surely, humans have been chosen to bring good into the world.
The all-knowing one, priest of Òrunmìlà,
Cast Ifá for Òrunmìlà.
He said the people of the world would come to ask him a certain question.
He said that Òrunmìlà should sacrifice.
Òrunmìlà heard and complied.
One day, all kinds of people; good people and those who do not allow good
in other people’s lives gathered together.
They then went to Òrunmìlà.
They said coming back and forth to earth tires us, Òrunmìlà.
Therefore, please allow us to rest in heaven.
Òrunmìlà said you cannot avoid going back and forth to earth
Until you bring about the good condition that Olódùmarè has ordained
for every human being.
After then, you may rest in heaven.[ii]

In this way, we can see that Yorùbá religion is concerned with strking balance and harmony between heaven and earth. Afarabale, which encapsulates self control, composure, gait, manners, diplomacy, “an authority that emanates from an undisturbed calm” is very important to the Yorùbás because it is only by being well-seated in this sanctuary of undisturbed calm that one can pay proper attention to all the elements of life and understand their symbiotic relationships. The most important of all relationships are those associated with family. Traditionally, where you live, your political access, your spiritual discipline and profession are all influenced, if not defined by your family lineage. The Fon people of Benin call the founding ancestors of each lineage towiyo, each of whom was born under the influence of a particular Odù Ifá.

So, in the same way that creation myths serve as charters that legitimize each king’s right to their respective thrones, they also detail the spiritual foundations and earthly missions of each towiyo and his descendants. In this way, the Yorùbá-Fon family is, in effect, the nucleus of all political and religious activity in the community. The towiyo is the family’s patron saint or principle deity. His descendants adore and worship him as their spiritual guide and support. “It is the duty of the head of the [family] compound to make an annual sacrifice to the founder to insure the prosperity of the members for the coming year. This is done on the day that the founder is said to have sacrificed to his orí (destiny) when he himself was alive.” And in the same way that Olódùmarè delegated to each òrìsà his or her dominion, He also assigned to each towiyo to a lineage, made up of many families, to embody the power of the òrìsà.

The towiyo are emissaries of Olódùmarè. Their mission and greatest concern is to continually increase the predominance of harmony and balance among and between family members. Furthermore, whereas the towiyo is the spiritual father of an entire family clan, each individual is more closely sponsored by a guardian ancestor. The Fon call this sponsoring ancestor the djotò (also called sedjotò, medjotò), ‘agent of birth’ (jo: born, arrive, remember; and tò: father, actor, agent, master). He is the force, the vital and spiritual energy, which models and directs the existence of the person; hence the title Se (Protector) that is given to him. The djotò is “Father of the coming into existence”, the direct collaborator of Mawu (God) in the generation of the child. The djotò then, is an ancestral guide and protector. Most importantly, that which he protects is the spirit, who is making the journey “from heaven to earth” to continue the mission started so many hundreds of generations ago. Ifá says that, with each passing generation, our mission is to gradually improve human character, to purify our souls, to improve conditions on earth until it is perfect once more.